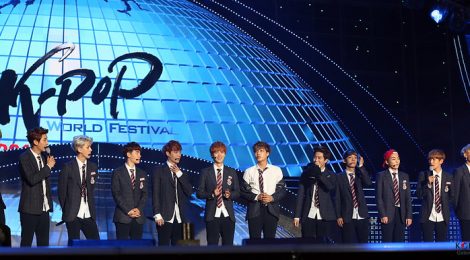 1) What is K-Pop and why is it so popular worldwide?

K-Pop stands for Korean Pop music. Currently, it is gaining international recognition but this is not a new sensation. In 1992, Seo Taiji and The Boys debuted and the group has heavily influenced the K-Pop that we all know now, which is now in its fourth generation. The first generation includes H.O.T., god, S.E.S., Shinhwa, and BoA. The second generation introduced BIGBANG, Super Junior, Wonder Girls, 2NE1, Girls Generation, and Shinee. The third generation gave us the groups that most people would be familiar with such as EXO, BTS, Twice, Red Velvet, Blackpink, Seventeen, I.O.I. iKon, and GOT7. The current, and fourth, generation introduced ITZY, TXT, Stray Kids, LOONA, ATEEZ, and TREASURE. There are so many acts but these would be the ones that are at the top of my head.

K-Pop is so popular worldwide because it’s something that the majority is familiar with. It’s pop music, but it’s also more than that. K-pop includes the whole package from the music to choreography to visuals like the fashion and the aesthetics to storylines. The whole production is attractive as it gives an experience. This is most especially true when there are comebacks as fans would not know what to expect. It could be a complete one-eighty from an act’s previous concept. And when you’re part of a fandom, there are fandom names, chants, slogans, merchandise– all these engagements make it a community.

2) Why do a lot of people say that “K-Pop Has Always Been Political”? Do you agree with this Statement?

In terms of K-Pop being political, it would depend on the angle that you would look at it from.

When it comes to the meaning, songs, in general, relay messages. One song can share a love story or a heartbreak. Another song can also express socio-political dissent or commentary. This is why the listeners resonate with it.

When it comes to policies, after the 1997 Asian Financial Crisis, the government decided to rebrand the country’s image. As part of restructuring the economy, they have also looked into exporting and showcasing their culture. Euny Hong, in her book “The Birth of The Korean Cool: How One Nation is Conquering the World through Pop Culture”, has explained that the entertainment industry of South Korea is still in the hands of private companies. These companies are responsible for producing and marketing their products domestically and internationally. Nevertheless, the South Korean is still exerting force in this push. In 2009, the Korea Creative Content Agency was established to encourage and facilitate the production of Korean popular culture content.

When it comes to the fandoms, they are participatory and engaging. This, combined with their presence in social media platforms, can certainly make an impact.

3) How can South Korean Pop Culture be a source of Soft Power? Why can we talk about K-Pop Diplomacy?

Hallyu or Korean Wave was first used by the Chinese press in the 1990s to describe the increasing popularity of Korean popular culture in China. Hallyu is now considered as a national brand. Hallyu fans want to see more Korean cultural content and learn Hangeul, the Korean language. There is also an increase in sales of Korean goods overseas as fans become interested in Korean products and lifestyles. This is a good example of soft power, which is the ability to persuade and attract others to attain the outcomes that one wants. Moreover, with the speed and fluidity offered by the internet, fans can easily share their experiences with K-pop through social media, therefore, encouraging cultural promotion. In other words, it is boosting South Korea’s reputation.

4) The ‘Korean wave’ (Hallyu) of culture has been called a ‘cultural weapon’ in North Korea, where it is referred to as nampung (‘Southern wind’). During times of inter-Korean tension, for example, the South Korean government has set up loudspeakers to blast K-pop tunes across the Demilitarized Zone. What is the impact of South Korean Pop Culture and K-Pop in North Korea.

Hallyu has even made its way to North Korea. A USB containing foreign content including South Korean movies and music is equivalent to a month’s worth of food. It is still illegal to possess and consume foreign TV, films or music and is punishable as it affects their loyalty to North Korea.

To the rest of the world, it’s Hallyu. But in North Korea, it is referred to as Nampung or southern wind. Nampung may not be strong enough to encourage North Koreans to protest against their government overnight but it is strong enough to make people curious about what goes on beyond their borders, and question their current situation as they see the differences.

5) There seems to be quite a strong relationship between the K-Pop fandom and activism. Can you give us some examples? Why do you think that K-Pop fans are sensitive to social and political issues?

The activities are organised by the fans themselves. With their presence and mobilisation, again, they are definitely able to make an impact.

They donate to charitable causes and social movements. For example, when EXO’s Suho raised awareness for ALS patients, the fans donated and also purchased items from the Suengil Hope Foundation to support the cause. When BTS donated $1million dollars to Black Lives Matter movement, the fans matched it and were able to gather the same amount for donation.

In terms of their mobilisation, a topic can easily trend on twitter with the use of hashtags. When #WhiteLivesMatter trended, K-Pop fans easily drowned the hashtag and made it ineffective as fancams of their favorite artists were uploaded. When the hashtag is clicked on, unrelated posts will be viewed.

Another instance was during Trump’s campaign in Tulsa. Many thought that there would be a flock of supporters in the rally due to the increase in the number of requested tickets. However, the day came, and the attendance was disappointing. It has been reported that both TikTok users and K-Pop fans pulled off this stunt.

Moreover, K-Pop has also been under fire for cultural appropriation. I have read the debates between fans on Twitter regarding the concern– which culture it was from and why, and the steps that fans have taken to send a message to the artists’ companies so that this will be avoided in the future. What admired me the most was the education rather than the cancellation.

I think fans are aware of social and political issues because, in this digital age, information can easily be retrieved; but it can also be easily distorted. K-Pop has a diverse audience all over the world with different ethnicities, age groups, genders, and sexual orientations. Based on a personal experience, due to this diversity, fans discuss and learn from each other. Of course, naturally, fans would like to make their favourite artists proud of them. But as a community, it has become more than that.